In addition to these eight covers, the issue will also feature a new cover and a special tribute commemorating Supreme Court Justice Ruth Bader Ginsburg, who was featured on the TIME100 list in 2015. See the cover: https://bit.ly/2ZYiEOL.

Of the 2020 TIME100 list, TIME CEO and editor in chief Edward Felsenthal writes, “This year’s list looks far different than any of us could have predicted just six months ago. The TIME 100 has always been a mirror of the world and those who shape it. While you will certainly find people who wield traditional power on this year’s list—heads of state, CEOs, major entertainers—it also includes many extraordinary, lesser-known individuals who seized the moment to save lives, build a movement, lift the spirit, repair the world…. Their work challenges each of us to wield our own influence toward a world that is healthier, more resilient, more sustainable and just.”

Of this year’s list, Felsenthal continues, “As a rule, the TIME 100 focuses on the living, but looming large over this year’s list is the impact of individuals such as Ahmaud Arbery, George Floyd, Breonna Taylor and Tony McDade, whose killings galvanized a reckoning around police brutality and systemic racism; Aimee Stephens, whose case led to a historic Supreme Court decision protecting the rights of LGBTQ Americans; and Li Wenliang, the Wuhan physician who tried in vain to warn Chinese officials about the corona­virus and later died of it. The issue also includes a memorial to Justice Ruth Bader Ginsburg, including the tribute that fellow Justice Antonin Scalia wrote when she was on the TIME 100 in 2015.” https://bit.ly/2EpVlFX

For the first time, TIME revealed the annual TIME100 list with an hour-long special television event on ABC. Produced in partnership with P&G, the TIME100 broadcast special is created by TIME’s Emmy award-winning television and film division TIME Studios along with industry leading global storyteller Done + Dusted, and is presented with exclusive premier sponsor Citi, signature sponsor Toyota Venza, and signature sponsor Smirnoff. Watch the show on demand on ABC.com.

On September 23, 24 and 25, TIME will host TIME100 honorees for a three-part series of TIME100 Talks, TIME’s series of virtual conversations that convenes influential leaders across fields to encourage cross-disciplinary action toward a better world, presented in partnership with TIME100 exclusive premier sponsor Citi, signature sponsor Smirnoff, and supporting sponsor AT&T. To register and see the full lineup of speakers and performers, visit: time.com/time100-talks/

TIME is a global media brand that reaches a combined audience of more than 100 million around the world, including over 40 million digital visitors each month and 45 million social followers. A trusted destination for reporting and insight, TIME’s mission is to tell the stories that matter most, to lead conversations that change the world and to deepen understanding of the ideas and events that define our time. With unparalleled access to the world’s most influential people, the immeasurable trust of consumers globally, an unrivaled power to convene, TIME is one of the world’s most recognizable media brands with renowned franchises that include the TIME 100 Most Influential People, Person of the Year, Firsts, Best Inventions, World’s Greatest Places and premium events including the TIME 100 Summit and Gala, TIME 100 Health Summit, TIME 100 Next and more. 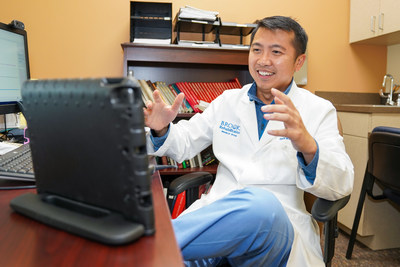 COVID-19 has been a catalyst to many changes in healthcare, including the expansion of telehealth in rehabilitation.

“This virus has been a catalyst to many changes in all of healthcare, including the expansion of virtual visits via telehealth. The study will focus on the experiences of rehabilitation patients and providers during the pandemic and will further inform how telehealth rehab services are performed in the future,” said Dr. Raine Osborne, Director of Research at Brooks Rehabilitation and study co-principal investigator.

Without the ability to treat patients in person, the continuity of patient care has been put at risk. Rehabilitation professionals express concern over the loss of vital touch points needed to facilitate patient treatment and progress, as barriers like a lack of appropriate technology or access to telehealth portals prove to be immediate hurdles. Historically, telehealth has hit a myriad of roadblocks due to regulatory and reimbursement issues. The pandemic has pushed through the necessity for innovation in patient care via virtual platforms, and this timely study will provide insight into the widespread, vital changes needed in order to continue to advance rehabilitation care.

“Many previously perceived barriers of telehealth have become invalidated, and patients and providers are seeing benefits of these services. Virtual services will continue to become an expectation of innovative healthcare and provide consumers with the access and convenience that they are looking for from their healthcare services,” said Emily Rumery, OTD and Virtual Services Coordinator for Madonna Rehabilitation Hospitals.

Virtual visits serve as an innovative means to interact with patients in a way that reduces personal protective equipment utilization amid a national shortage, as well as decreases exposure to COVID-19. Information gleaned from the study will further elevate safety for patients and providers, as well as build on the foundational methods for virtual care facilities like Mary Free Bed Rehabilitation Hospital have been working on in recent years.

“Since we started on this journey four years ago, we have put processes in place to integrate telehealth workflow into existing patient care, so it did not become ‘one more thing.’ The education we provided the medical staff, other clinicians and patient service coordinators really helped when we flipped the switch to virtual outpatient services during the first wave of the pandemic. The foundation was already there,” said Jason Peoples, co-principal investigator, Director of Technology and Innovation, Mary Free Bed Rehabilitation Hospital.

“Critical to this research is identifying barriers that need to be overcome to ensure individuals of all abilities, including those with limited movement and speech capacity, can use telehealth fully,” said Dr. Judith Burnfield, co-principal investigator, and Director of Madonna Rehabilitation Hospitals‘ Institute for Rehabilitation Science and Engineering.

Results will provide essential information that will help drive the creation of telehealth resources for patients and shape the way telehealth is executed in rehabilitation. In addition, findings will support initiatives and legislation needed in order to meet the needs of patients and providers nationwide.

The survey will target rehabilitation patients and providers who have received and delivered care since the pandemic was first declared by President Trump on March 11, 2020. Data is anticipated to be available early 2021.

New offering allows automakers to control the number of software versions in vehicles, better understand the state of entire fleets

In recent years, the number of vehicle ECUs receiving software updates via over-the-air (OTA) technology has been steadily increasing, making it difficult for automakers to track and manage software configurations across their fleets. As these ECUs receive OTA software updates over time, different software permutations will appear in the field as not all vehicles will be updated at the same time. This results in a multitude of software combinations which need to be tracked and managed by the automaker for vehicle maintenance and regulatory compliance.

“At Airbiquity, we’re constantly assessing the challenges automakers face and applying our software technology and expertise to address them,” said Keefe Leung, Vice President of Product Management at Airbiquity. “Automakers need to actively understand and manage their connected vehicle software. Our Vehicle Configurator is a powerful tool to bridge disparate pieces of software information based on the context provided by automakers while also delivering automation that integrates to their existing processes.”

“With the ubiquitous deployment of OTA software update capabilities automakers face a challenge in managing software configurations across a wide range of vehicle platforms, components, and markets,” said Alex Oyler, Head of Car IT at SBD Automotive. “To meet emerging regulatory requirements automakers must know which vehicles are running which software versions at all times. Automakers must also prove to regulatory agencies that they have control over their connected ecosystem, and without a high-integrity platform for managing this information they will face regulatory backlash and preventable cybersecurity challenges.”

Frost & Sullivan’s recent analysis, Digital Hospitals: Creating Growth Opportunities in Patient Care during the COVID-19 Pandemic and Beyond, finds that digital hospitals that deploy smart technologies, such as artificial intelligence (AI), remote health monitoring, and robotics, deliver higher standards of patient care and hassle-free experiences for health professionals. The adoption of such advanced technologies has witnessed strong traction during the COVID-19 pandemic.  There is a massive influx of patients, and traditional hospitals are struggling to provide quality care and ensure health professionals’ safety. Technology adoption is expected to rise further in the next two to three years due to higher-quality care and significant productivity gains.

Jadhav added: “Digital hospital operators need to focus on building internal architecture, especially staff workstations and patient rooms that follow evidence-based design (EBD), as these are the areas where clinical decisions are made and care is provided, respectively. Additionally, decentralized healthcare staff workstations outside the patient rooms can allow the staff to be closer to the point of care rather than a centralized area, which increases the travel distance for the health professionals.”

The increasing adoption of digital technologies in hospitals presents immense growth prospects for market participants in the digital hospital space, including:

Digital Hospitals: Creating Growth Opportunities in Patient Care during the COVID-19 Pandemic and Beyond is the latest addition to Frost & Sullivan’s Technical Insights research and analyses available through the Frost & Sullivan Leadership Council, which helps organizations identify a continuous flow of growth opportunities to succeed in an unpredictable future.

For over five decades, Frost & Sullivan has become world-renowned for its role in helping investors, corporate leaders and governments navigate economic changes and identify disruptive technologies, Mega Trends, new business models and companies to action, resulting in a continuous flow of growth opportunities to drive future success. Contact us: Start the discussion.